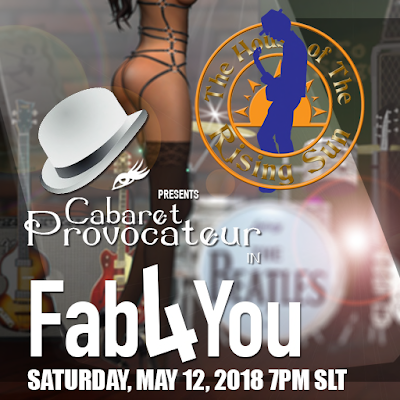 The Cabaret Provocateur will present it's final scheduled performance of the program "Fab 4 You" at The House of the Rising Sun Theater on Saturday May 12, 2018 at 7:00PM SLT
Your Taxi to the Show Here!

Fab 4 You does feature female nudity.

Gloria G  began her performing career as a synchronized swimmer with the touring ensemble "The Water Lillies". She also found a passion for synchronized dancing and frequently does so for recreation. She's now pleased to perform with Cabaret Provocateur.

Lonigale Sweetbutter is the newest member of the dancing group and loves performing with everyone and is a natural.  A great addition to the troupe.

Our MC and DJ will be for the evening will be Alobar Valeska, owner of the House of the Rising Sun Blues Club and theater. Known to his friends as "Alo" he has been spinning the blues and classic rock on Second Life since Muddy Waters was in knee pants. Sadly, his precious music library was destroyed a year ago in a tragic 8-track malfunction. Now, through persistence and the generosity of friends, he's upgraded to cassettes and is back delighting his legion (all 10 of them) of adoring fans and blues-rock aficionados across the grid. He's owned and regularly DJs at the House of the Rising Sun Blues Club, known for it's laid-back, fun, and drama-free atmosphere for 9 years, off and on. He'll even take the occasional side-gig, especially when it involves a bevy of scantily-clad women and/or free cheese dip.

Your Taxi to the Show Here!