The Cabaret Provocateur presents "Fab 4 You" 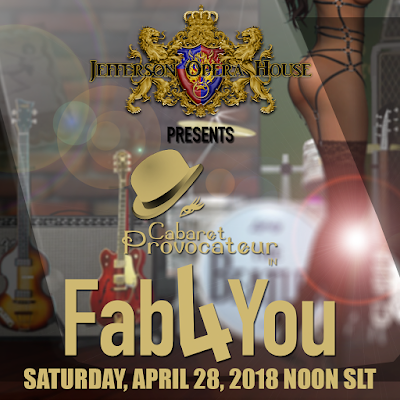 The Cabaret Provocateur will present it's encore performances of the program "Fab 4 You"  at Jefferson Opera House on Saturday April 28, 2018 at noon SLT

Jefferson Opera House is part of the Mysterium's Mansion Adult sim. and Fab 4 You does feature female nudity.

Fab 4 You is a program in 6 acts feature music performed by Elton John, Robin Williams and Bobby McFerrin, Lisa Lauren, Eddie Izzard, Goldie Hawn, and Phil Collins all originally written and performed by the Fab Four, (The Beatles).  The dances will take you on an journey from Manhattan rooftops through Arabian Nights, to  Broadway, back stage and in front.