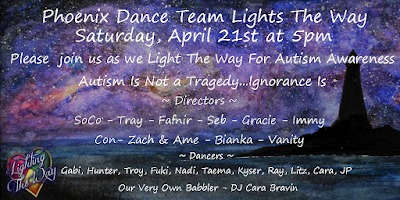 Most children on the spectrum can only be educated and assisted until the age of 21 years old where they will "Max" out of benefits. After that, it's up to the parents on where and what to do to help their child. It's every parent's biggest fear on what happens when their child turns 21 and where they can go to get the best quality of life possible.

Autism is the fastest-growing serious developmental disability in the U.S. More children will be diagnosed with autism this year than with AIDS, diabetes & cancer combined.

With that being said, The Phoenix Dance Team would like to invite you to their performance on Saturday, April 21st at 5pm. The entire team will come together as one to Light The Way for anyone who is currently on the Autism Spectrum and for those who care daily for anyone on the spectrum. Together, through dance an music, they will shine their beacon to those in need.

Your ride!
Posted by Ame Starostin at 7:00 AM