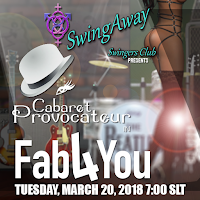 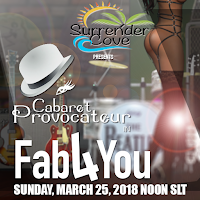 The Cabaret Provocateur will present it's encore performances of the program "Fab 4 You" on Tuesday, March 20, 2018 at 7:00 pm at SwingAway, and at Surrender Cove on Sunday March 25, 2018 at noon SLT

Gloria G is the member of the group newest to SL dance. She began her performing career as a synchronized swimmer with the touring ensemble "The Water Lillies". She also found a passion for synchronized dancing and frequently does so for recreation. She's now pleased to perform with Cabaret Provocateur.

SwingAway is a members club, but all are welcome. When you arrive on the sim ask for a TP to the Cabaret Platform.