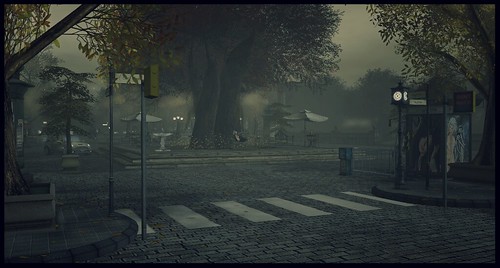 Decided to cam around the Liaison Collaborative area and saw this scene. It's almost real, isn't it? Except that shopping in the closed malls or the stripmalls, there's a Disney-like unrealness about the real life shopping experiences and neighborhoods, that something realistic in the virtual world is a de-optimized variant of the overwhelmingly sterile and planned and maintained experience in the real world.

It sets the mood and gets the visitor in the frame of mind to relax and feel at ease and shop.

I need to go to shopping events more often and cam around after the rush dies down. Some creators and event planners put a lot into the setting, and it's impressive what detail and arrangement they create.

Which is similar to the effort that Second Life dance performers and choreographers and set designers put into the sets.
I mean, you can't just have a dancer there on a stark empty stage, right? You have to provide some kind of context or setting, a way of telling the story.
Lush and natural, angular and bright, dark and dreary... these all visually put you into a mood just as much as the music and the dance moves.
Gene Kelly on his own without the street and lamp post and the (fake) rain was an excellent dancer, but all those other elements put together the act. Otherwise, it's just dancing, or mime.
It's necessary for the art to fill the canvas.

Recently, I saw an act... I think it was at Atlantis, they had two dance acts on the same set. It was a swamp with a witch that captured a wayward visitor, and then the next was a dance scene with.. Elayn? I'm not sure, I should label my photos better.

I found that fascinating... taking the same set, and two different artists taking it in different directions.

There have been some sets so lush and interesting, I've right-click inspected the elements, and even went shopping for those items because they'd be perfect for my park. I got the mushrooms and moss-covered piano, and was inspired to go with a koi pond after some Club Image acts. 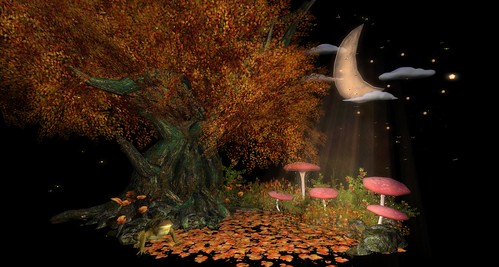 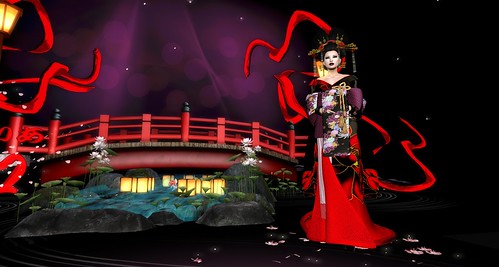 Oh, and roses from this other act... got a particular gate because it had roses as bright as these. 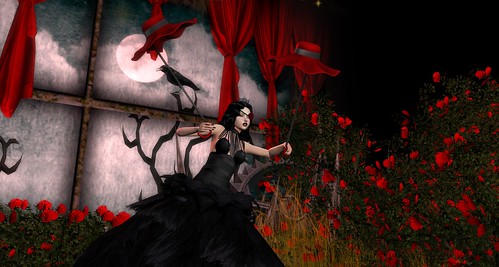 And Londyn had an act that incorporated anc meteors that were perfect for my reading room. anc has a lot of elements that crop up in the dance performances out there.

Design ideas from the sets of dance performances instead of the Second Life home and garden magazines... kinda neat.