When it comes to SL experiences, I believe in “cujus regio, cujus religio.”

It’s a phrase from the old Holy Roman Empire. It translates to “Whose realm, his religion” Instead of imposing a single religion for the entire empre, the individual principalities and fiefdoms could choose for themselves. This one was Catholic, that one was Protestant.
(Does it really matter which when you’re the witch that they’re burning at the stake?)

So, how does this apply to SL? Aren’t we trying to escape all that real world shit by coming here and playing and performing and making cool shit together? Yes… but… well…

Look, I administer a few regions. My contract is with Linden Lab. They have some core rules, some community standards everybody has to follow, you know, don’t be a racist, blah blah blah, Dulac is a perfect place, be sure to wipe your… face, and try not to bother us while we’re busy building this new VR thing, etc. and so forth. When was the last time that you read them?
Maybe go read them again and come back when you’re done? I’ll still be here, okay?

But after that, I can set the permissions and terms and Covenants for the neighborhood. There’s a few basic rules we follow, but the big common-sense one is “Don’t be THAT place.” Another one is Wheaton’s Law: “Don’t be a dick.” Oh, and “Either pay your share tier on time or let me know when it’s coming.” because rental boxes are just so damn annoying and cold. And the last one is: “What happens over 300 meters is none of my business, and not my problem. Or yours.”
I know there’s some freaky shit going on up there, right? Well, maybe… not sure… but… That’s the point. Not my problem. Or yours. We all want to be somewhere nice and quiet and beautiful.
Over time, we’ve kind of self-selected to form a community that doesn’t leave our junk and toys out on the yard. If we’re camming around and stop and go “Um, what?” then, yeah, there’s a problem.
You want to make a statement? There’s a lot of Mainland to make a statement. Enjoy. I think it works more often than not.

There used to be a Gorean sim near my neighborhood. People would teleport over to see what was across the water. Some of them were leading others on leashes. I’d get compliments from both. Weird, man. For some, that’s their thing. It’s roleplay. It’s escapism. It’s playing pretend by a shared set of rules. It’s the basis of a culture and community. Good for them, but that’s not my thing.
And a few would walk up to me and tell me that I was dressed inappropriately for a slave. Or that they were claiming ownership of me. My response to their rudeness was simple: kick and ban. Cujus regio, cujus religio.
(Heard of Moses, motherfucker? That slavery shit ended when we told the Egyptians to build their own damn pyramids and went for a thirty-year hike.)

And when I went to the visitors area of their sim, you know, curious, I was polite, cammed around, shopped a bit. Nice layout, good canals and bridges, and got a few ideas for my park. But I didn’t walk on to their roleplay turf to stir things up. Didn’t go around freeing slaves or kicking over oxcarts or flipping moneychanger tables at the tem- oops, okay, maybe not that biblical.
Once again, Cujus regio, cujus religio.

So what does this have to do with Dance Queens? Okay, I go to a lot of dance performances, and I shoot a lot of photos. I read the notices, and try to wear something appropriate for the venue.
The place I think of first when I think of Proper Attire Required is Frank’s Place. Everyone told me it’s a nice place, a good place to be seen. It’s the place that everyone goes just to get kicked out of for some reason or another. I swear, that must be their business model or something.
But, once again, cujus regio, cujus religio.
When I went there long ago, I got booted because of my name. So, the owner loses out on seeing “Crap Mariner paid you 100L.” notices since then. Kinda like how a pizza place that gives you a hard time isn't just losing out on selling you that pizza, but all the future pizzas. But they’re still around, that crazy hip Frank's Place, so they must make up for it in quality or traffic or something.
Fashion Fascism pays.

Once again, what does this have to do with Dance Queens? Well, here’s the entryway at a very popular and entertaining venue that hosts an excellent crew of performers. 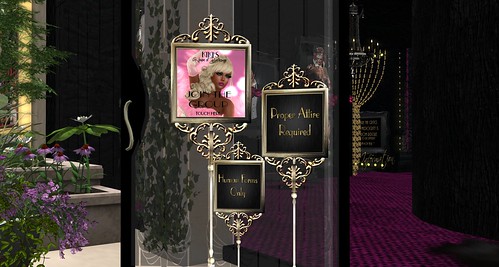 As I said in a previous post, a group joiner is a good thing. Lets folks know how to get updates. And there’s a maqeuee overhead that tells when the next show is. But this post isn’t about group joiners.


Let’s look a little lower. If I see “Formal Attire Required” I try to look nice, but I’m not the gown-and-heels type. (I guess I never quite got over Frank’s Place putting me in my place for my name. Boo hoo.) Formal attire, looking nice, fitting the atmosphere. If you’re putting on a show, paying for the land, covering all the administrative hassles and headaches, okay, cujus regio, cujus religio. You make the rules. I can choose to follow them, or I can skedaddle and spend my money elsewhere. Money can talk, but it can walk out with the bullshit, right? Seeing as how I want to stay and shoot the pretty pictures for whatever reason that motivates me, I’ll dump as many scripted items as I can, and I’m usually in the green on the rare occasions that my name appears on the script checker boards. I’ll look decent, and not be too much of a drag on the resources. (Okay, let’s not get into the semantics of “drag” please?)

Thing is, some of the fancier ways to dress add more rendering cost and more scripts, right? People are bad enough about scripts as it is, although the regulars do try to switch between their "show" ensembles with all the movers and scripts and such as opposed to their public looks and outfits, which are less laggy and scripty. But every now and then, someone hops from their show to another's show, and they still have the heavy scripts... and they gotta pare it down. (Me, I just have my minimal impact outfits prepared, and I derender the shame board so I don't get on the peer-pressure bandwagon. That's for the hosts to deal with, eh.)
But I've found a correlation between fancy and lag, and lag is kind of the silver bullet in the heart of the SL dancing werewolf we're trying to all avoid, right?
Hrm... werewolves... non-humans... that reminds me...