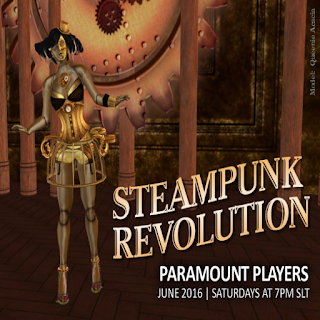 Come join us for an evening of classy but sassy entertainment as we the PARAMOUNT GRAND THEATRE, the Paramount Players dance for you June 11th, 18th, & 25th at 7pm slt, in our new show, Steampunk Revolution.

The Players bring you to the past where steam and cogs ruled the world.

Steampunk, is a subgenre of science fiction or science fantasy that incorporates technology and aesthetic designs inspired by 19th-century industrial steam-powered machinery. Although its literary origins are sometimes associated with the cyberpunk genre, steampunk works are often set in an alternative history of the 19th century's British Victorian era or American "Wild West", in a post-apocalyptic future during which steam power has maintained mainstream usage, or in a fantasy world that similarly employs steam power.