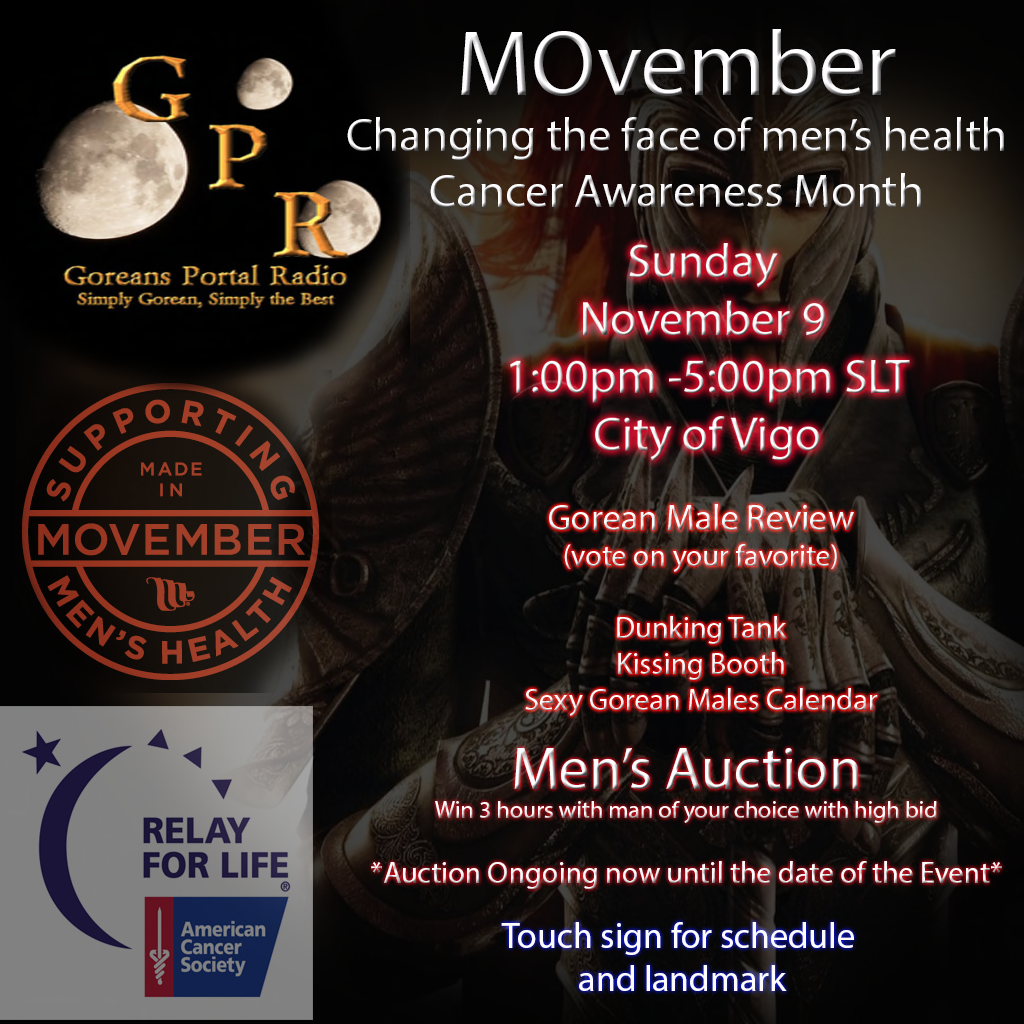 The City of Vigo is hosting a fundraiser for Men's Health and Cancer Awareness Month.  MOvember!!  This fundraiser includes a dance show featuring both solo and group performances from some of SL Gor's hottest men.  Will they leave their hats on?  Come and find out, and support this Relay for Life event that focuses on the men's health!

November 2nd, the auction begins.  Auction boards at City of Vigo (who is sponsoring as the Host Sim)!

1-3 slt  Gorean Male Review!  Masters give it what they got! Singles and group dancing!  Gorean dances and stripteases!  Maybe we will see...the FULL MONTY!

Each dancer will have a photo up and their own kiosk to determine who is the hottest man that danced!  Several individual dances and a couple of group dances to showcase the strong luscious men of Gor!  It isn't only the ladies that can set the sands on fire but the men can and WILL!

3- 4:45     Kissing booth - Get your sexy smooches on from the hot men who are taking part in this epic event! Who is the best kisser?  Whose lips are cold as ice?  Only you can decide!

Dunking booth to dunk that Master, Judge or kajirus that gives you a hard time or low scores!  What about that man that captured you and cut your hair?!  Now is your chance for payback!

Men display their mustache and beard!  What else will the be displaying?!?!  This is men at their finest!  Flirting, teasing and trying to get you to donate or bid on them for the auction, much like jailing works!  Who will win the role of Mr. Macho MOvember!  Like what you see?  Want more?  Bid on them for the auction or show them JUST HOW much you want to rp with them through donations if you do not win the auction!  Show your sim spirit by having the men representing YOUR sim get the most donations!

Calendars for sale of the sexy Gorean Masters in sl.  Who will be the Valentine hunk?  Who is the most patriotic for July?  Who is Santa and has loads of gifts in his bag of goodies! Every ten minutes a new month will be displayed to show which Master and from what sim, got that month!

AUCTION AUCTION AUCTION! Don't forget to come and bid on any one of SEVERAL sexy men who are up for auction for RP time, with all the monies going to the American Cancer Society for MOvember - Prostate Cancer Awareness Month!  These HOT Masters and Kajirus are serving up some time to give the sexy kajirae and the FW whose veils will flutter with warm breath once they get that man for some rp time that they have been eyein!
Thanking our sponsors! Our sponsors are donating money and or gifts to the men that have so willingly given up their time for this phenomenal cause!  There will be boards placed with their logo and names, please consider checking out what htey have to offer!

The AUCTION CLOSES!  AT this time, we will run down the totals we have accumulated thus far and announce it over the air so that everyone who has contributed can know how Goreans serve it!  The auction will close and the men will be around to sort out a time with those whom have won their time.

We will announce who is Mr. MOvember Man 2015!  With this title comes special prizes and the OPTION to show his reign in a few events for RFL and dance through out the coming year!  He will be displayed on our future website and pass the title over next year!  Or...will he keep it and reign once more!

All activities are taking place at the City of Vigo who graciously is hosting the event this year!