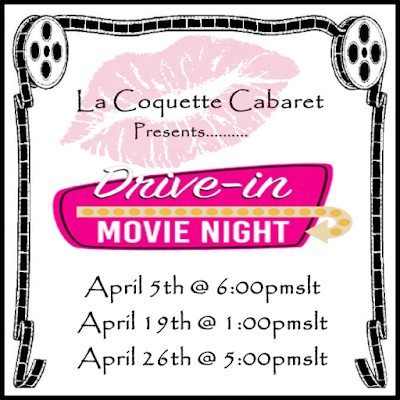 *~La Coquette Cabaret~*
~AT THE DRIVE IN~

Drive-in theaters are an ingrained part of American culture much like baseball and homemade apple pie. Between 1940-1970 Drive Ins were all the rage! What better way to spend more time in your beloved automobile than spending an evening under the stars watching a movie.  Drive In's became a melting pot of fogged up windows caused by making out or being impaled by a stick shift and ofcourse, a trip you'll 'never forget' to the back seat, at least that's what some guy told you!So join us,  as we take you on a trip back in time....Stay after the show there will be an after party with DJ Dune spinning the tunes!

This is an Adult sim the show does contain some nudity. No child avatars will be permitted. Dress to Impress!!