Paramount Players "Cleo and the Czar" 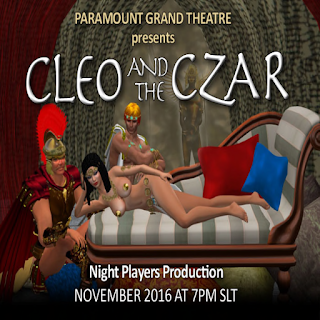 The Players are putting on a satirical play. November 12th and 19th at 7pm slt at there new home. Cleo and the Czar is about Cleopatra and her many escapades of being a queen.

Cleopatra VII ruled ancient Egypt as co-regent for almost three decades. She became the last in a dynasty of Macedonian rulers founded by Ptolemy, who served as general under Alexander the Great during his conquest of Egypt in 332 B.C. Well-educated and clever, Cleopatra could speak various languages and served as the dominant ruler. Her romantic liaisons and military alliances with the Roman leaders Julius Caesar and Mark Antony, as well as her supposed exotic beauty and powers of seduction, earned her an enduring place in history and popular myth.