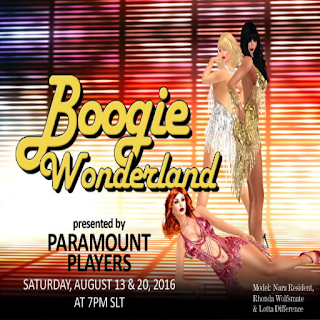 Come join us for an evening of classy but sassy entertainment as we the PARAMOUNT GRAND THEATRE, the Paramount Players dance for you August 13th & 20th at 7pm slt, in our new show, Boogie Wonderland.

Disco is a genre of dance music containing elements of funk, soul, pop, and salsa. It achieved popularity during the mid-1970s to the early 1980s. Disco can be seen as a reaction against both the domination of rock music and the stigmatization of dance music by the counterculture during this period.

The disco sound has soaring vocals over a steady "four-on-the-floor" beat, an eighth note (quaver) or 16th note (semi-quaver) hi-hat pattern with an open hi-hat on the off-beat, and a prominent, syncopated electric bass line. In most disco tracks, string sections, horns, electric piano, and electric rhythm guitars create a lush background sound.