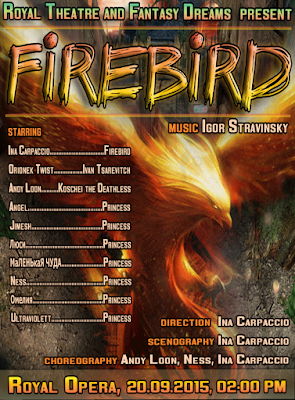 Sunday, September 20th at 2pm SLT
at the Royal Opera

In the enchanted garden of Kastcheï the Immortal, the Firebird appears, chased by Prince Ivan. The Firebird tries to pluck golden apples from the magic tree, but Ivan seizes her and will not release her until she gives him one of her feathers as a pledge of help should he ever need it. She flies off.

The darkness dissolves, and Ivan finds himself at the gate of an old castle. Seven maidens come out, led by the beautiful Tsarevna, who tells him that this is the castle of Kastcheï, a magician who attacks passing travelers by casting spells on them. The couple dance. As dawn arrives, the maidens must return to the castle.

In spite of Tsarevna's warning, Ivan decides to follow them. As soon as he opens the gates, bells ring out and a crowd of strange figures rush from the castle, followed by Kastcheï.

Kastchei advances on Ivan and tries to turn him to stone. But Ivan shows him the Firebird's feather. She reappears and forces the crowd to dance until they fall exhausted to the ground. Ivan steals  the great egg that contains Kastcheï's soul. He throws it to the ground. Kastcheï dies, and his spell is broken. The captives are restored to human form and everyone rejoices.