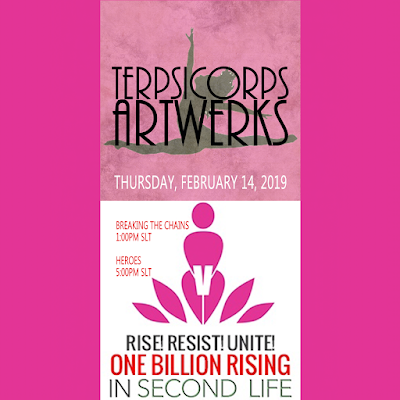 ONE BILLION RISING began as a call to action based on the staggering statistic that 1 in 3 women on the planet will be beaten or raped during her lifetime. With the world population at 7 billion, this adds up to more than ONE BILLION WOMEN AND GIRLS.

Every February, we rise – in hundreds of countries across the world – to show our local communities and the world what one billion looks like and shine a light on the rampant impunity and injustice that survivors most often face.  We rise through dance to express joy and community and celebrate the fact that we have not been defeated by this violence. We rise to show we are determined to create a new kind of consciousness – one where violence will be resisted until it is unthinkable.

For the 7th year, on February 14, 2019, men and women in Second Life will join activists, writers, thinkers, celebrities, and people across the world to Rise, Resist and Unite as a show of unity, individual strength, and the need for change. (From https://onebillionrisingsl.wordpress.com)