Guy Wardell IMd me today about problems that LPBA had with audience scripts last Saturday. Here is an edited version of our IM:

Here is the Notecard

If there were any doubts that the LPBA could not put on a Great Show they were totally dispelled on Sunday.

We had the largest audience ever, 54 in the theatre, and the largest number of participating dancers- 27 on stage for act 4. We have raised over US$100 for the Good Cause.

We had total cooperation from a wonderful audience and the new arrivals vestibule that Lizzy made worked wonderfully.

Thank you is a little word but we all hope you know how much your tremendous dedication, loyalty and hard work is appreciated by us, your fellow students, the audience and the recipients of our Good Cause donations.

It would have been so easy to get downhearted after Saturday’s problems but we did the opposite and gave our best performance ever – a wonderful achievement.

Please take great pride in what you have all done and achieved.

With thanks and best wishes to you all,

So, I asked Guy for details of what he had done and he invited me to the vestibule and showed me the details.

Here Guy, Lizzy Saintlouis and I are at the vestibule.

The audience members land at the vestibule for the show. There are two signs, a script monitor and a curtain here. 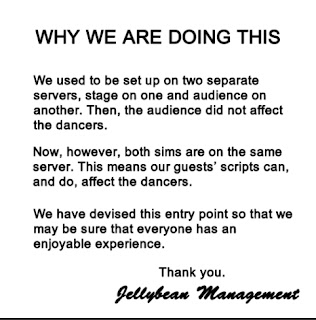 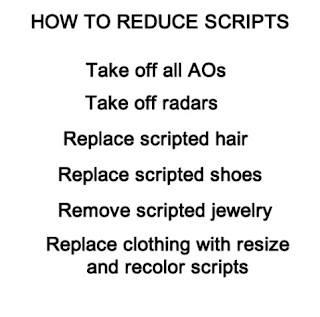 The script monitor shows the number of scripts and the memory required. Guy said it is a 150L script monitor found on SL Marketplace. It's made by Karsten Runningbear. Some of you may have the one I have made by Ales Beaumont. Both do the same thing.

The curtain has text on it describing the limits for number of scripts and memory. 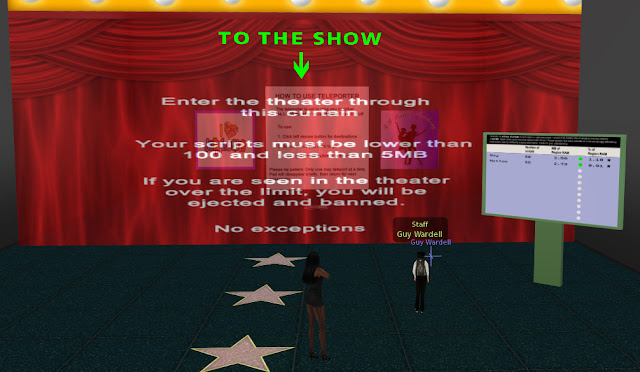 Guy has written a script ([PE) Script lag gate v1.02) that prevents passage through the curtain if an avatar's script count exceeds 100 or the memory exceeds 5 MB. He donated the script to us and the script and two sign textures are in the DANCE QUEENS Free Stuff box at Dance Central with the name Audience Script Control.

Once an audience member passes through the curtain, she/he can TP to the theater. In the theater is another sign and script monitor. 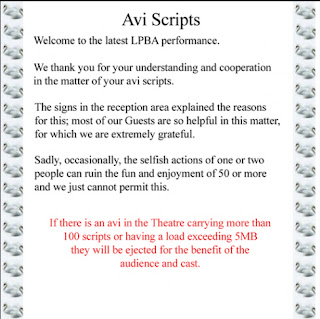 Guy then ejected anyone in the theater over the limits. Fortunately, no one was ejected. The avatar script monitor I have does the ejecting automatically.

So, many thanks to both Guy and Lizzy for the details on how they have helped solve this problem.